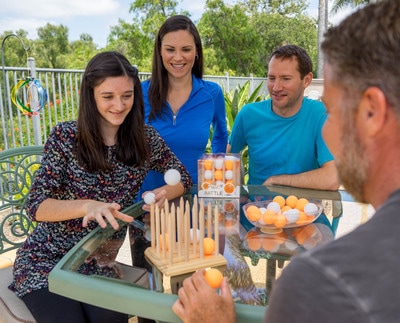 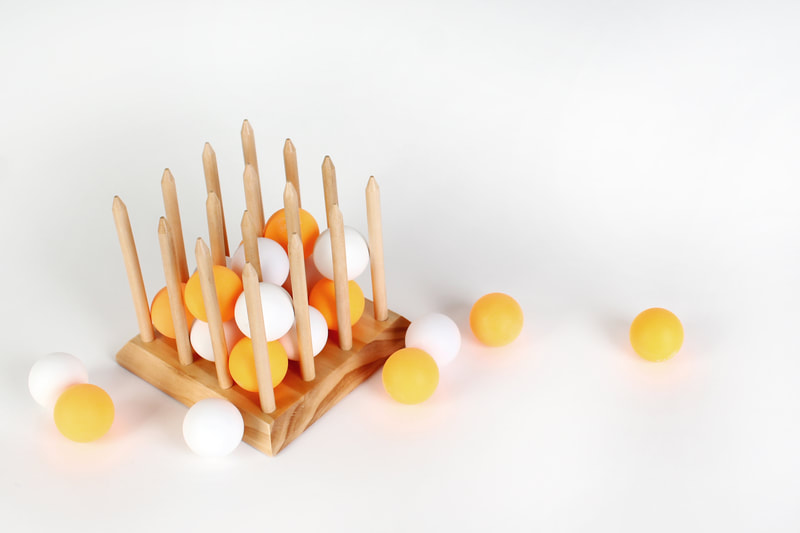 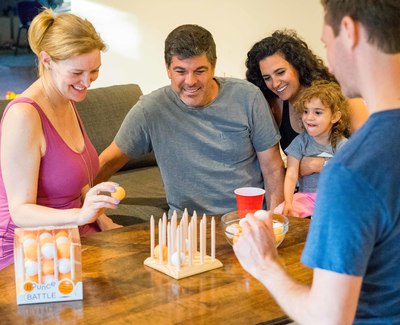 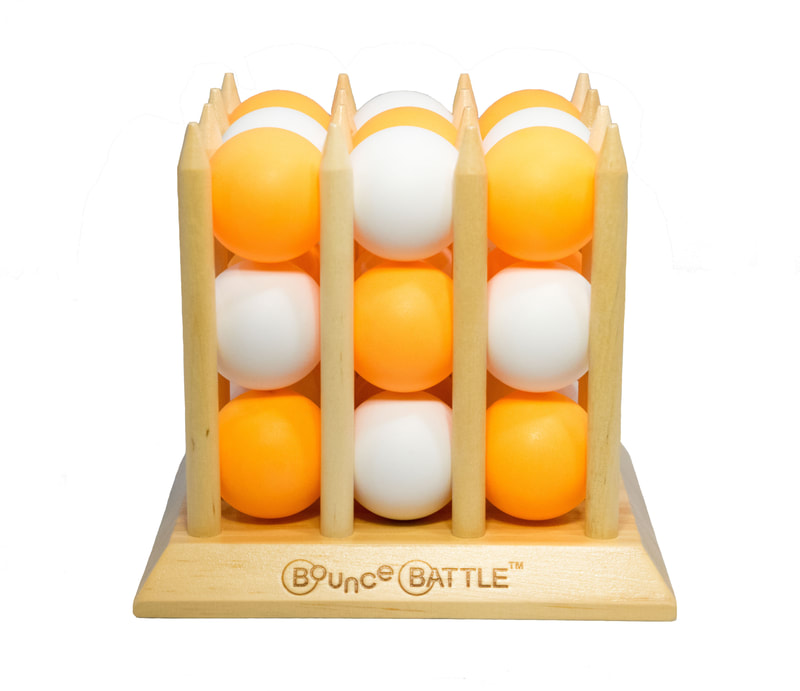 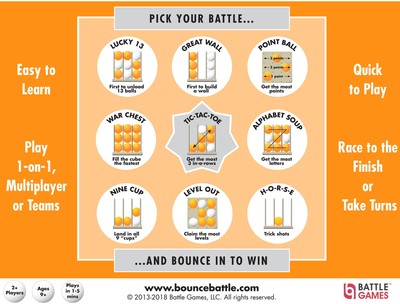 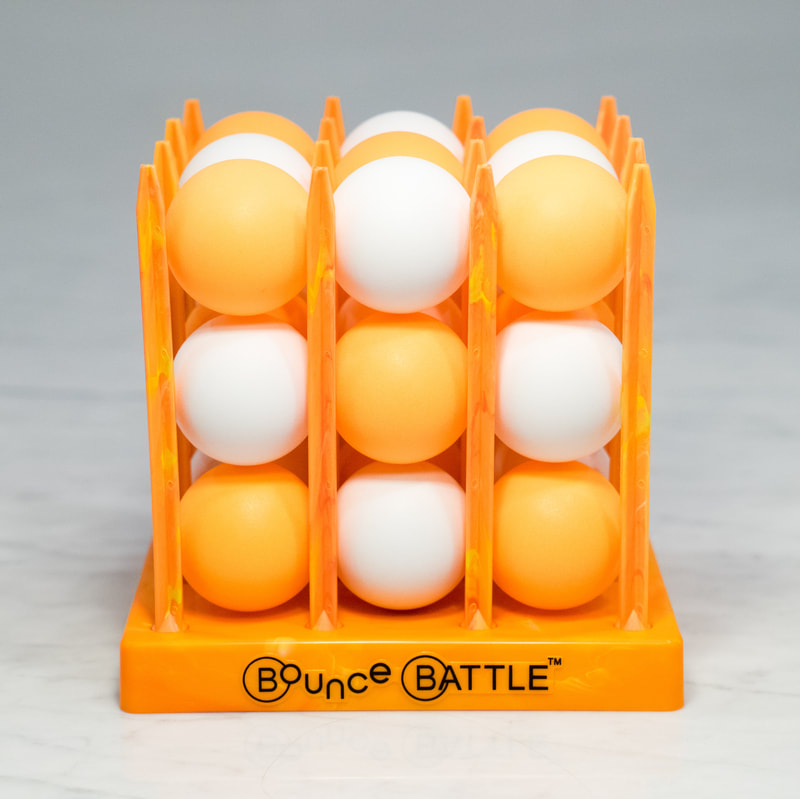 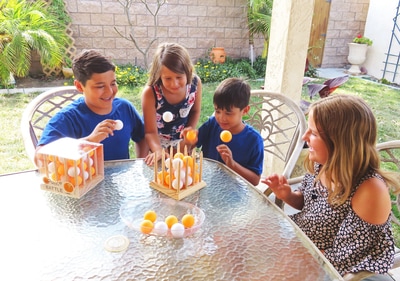 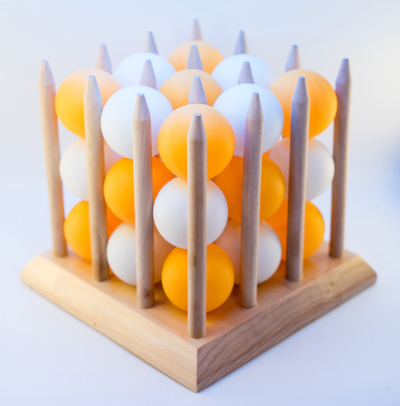 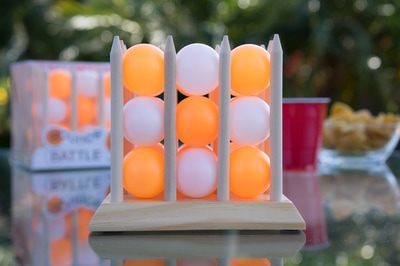 Now there even are more ways to play.  Enhance your enjoyment of bounce battle with this add-on deck of cards to create hundreds of ways to play!

The object of the game is to bounce balls into the game cube to win various battles.  Place the game cube squarely on a solid table or floor.  Position yourself close to the cube on the opposite side of your opponent (closer bounces are easier).  Choose your color, pick your battle and bounce in to win!

1. Once the cube is set, it remains in that position until the battle is over.

2. Balls must be bounced into the cube from your side of the cube.  Bounce as close to the cube as you want; as long as it bounces in, it counts.

3. Your turn is over after one bounce attempt.

4. Once a player wins and/or runs out of balls, the battle is over. 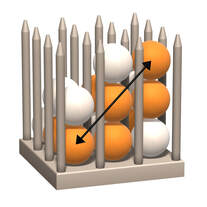 3D TIC-TAC-TOE BATTLE
(2 players or 2 teams)
​
Be the first to bounce three balls in-a-row in the cube in any row, column or diagonal.

​Single Round Option: Be the first to bounce three sets of three balls in-a-row in any direction.

Multiple Round Option: Be the first to bounce a cumulative score of 25 sets of three balls in-a-row in any direction.  In order to reach the winning score, play as many rounds as it takes.  A round is over when one player runs out of balls, at which point each player adds up the number of sets scored in the round.  The score of the round is added to each player’s total score for the battle.  The player with the least amount of sets scored in the previous round bounces first in the next round.  The battle is over as soon as a player has scored 25 sets and wins by two.  For shorter or longer battles, reduce or increase the number of sets required to win (e.g., 10 sets or 50 sets).

Challenging Alternative: For an extra challenge, restrict the qualifying sets to those in rows only, columns only or diagonals only. 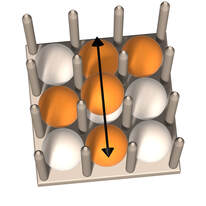 Be the first to get three balls in-a-row as seen from above the cube; only the top balls in any space count (block your opponent!).
​
T​IC-TAC-TOE LEVEL BATTLE
(2 players or 2 teams)

3. If there is no winner after two levels, attempt to score a set on the top level.

​Be the first to bounce 13 balls into any location in the cube. 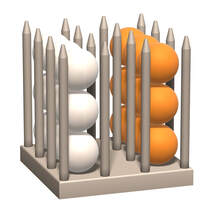 Be the first to bounce nine balls into the wall closest to you. In this battle, it does not matter which ball colors are used.  If you bounce in your opponent’s wall, however, the ball stays in place.

Challenging Alternative: For a more challenging battle, be the first player to build the wall closest to your opponent. 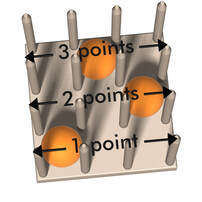 Countdown Alternative: Bounce the most balls into the cube within 30 seconds.
​ 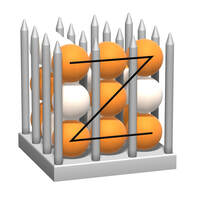 Be the first to bounce balls in the form of a chosen letter or shape on any horizontal, vertical or diagonal level.  For example, try bouncing an X, Y or Z into the cube.
​​
NINE CUP BATTLE
(2 players or 2 teams)

Be the first to land in all of the nine spaces (or “cups”).  Two balls per turn.  Remove duplicate balls from cups.


LEVEL OUT BATTLE
(2 players or 2 teams)

This battle is similar to the game of H-O-R-S-E in basketball where the winner is the player that does not spell “HORSE.”  For this battle, you are free to place the cube anywhere you want and bounce from any location around the cube.  However, players should agree on whether each shot is to be matched by bouncing into the same space (or “cup”) within the cube or anywhere within the cube.  The trickier the shot, the better.

1. Player 1 is the “leader” and bounces a ball in any manner they desire into the cube after calling their shot.

4. Except for shots by the leader, each time a player misses a shot, a letter is added to their score, beginning with H, then O, R, S, and finally, E.  The next player then becomes the leader.

5. When a player spells “HORSE” they are out of the battle.  The last player standing wins.

To win, you must bounce the most balls into the cube before getting three strikes.  A strike is when you bounce a ball and it does not go into the cube.  Your turn is over after your third strike.  Add up the total number of balls in the cube (“home runs”) and then it is the next player’s turn.  The player with the most home runs wins.

Each of the following alternatives can be added as a rule to most of the battles as long as all players agree.

Speed Battle. Battle simultaneously without alternating turns to see who is the fastest.

Call Your Shot.  You must call your shot before you bounce.  If you do not bounce in the location you called, then you must remove the ball from the cube.

Double Bounce.  Your ball must bounce twice before landing in the cube.

Raise The Cube.  Elevate the cube from the surface using books or boxes to make it more challenging to bounce in the cube.

Time Test.  Compete based on the shortest time or number of turns taken to complete a battle.